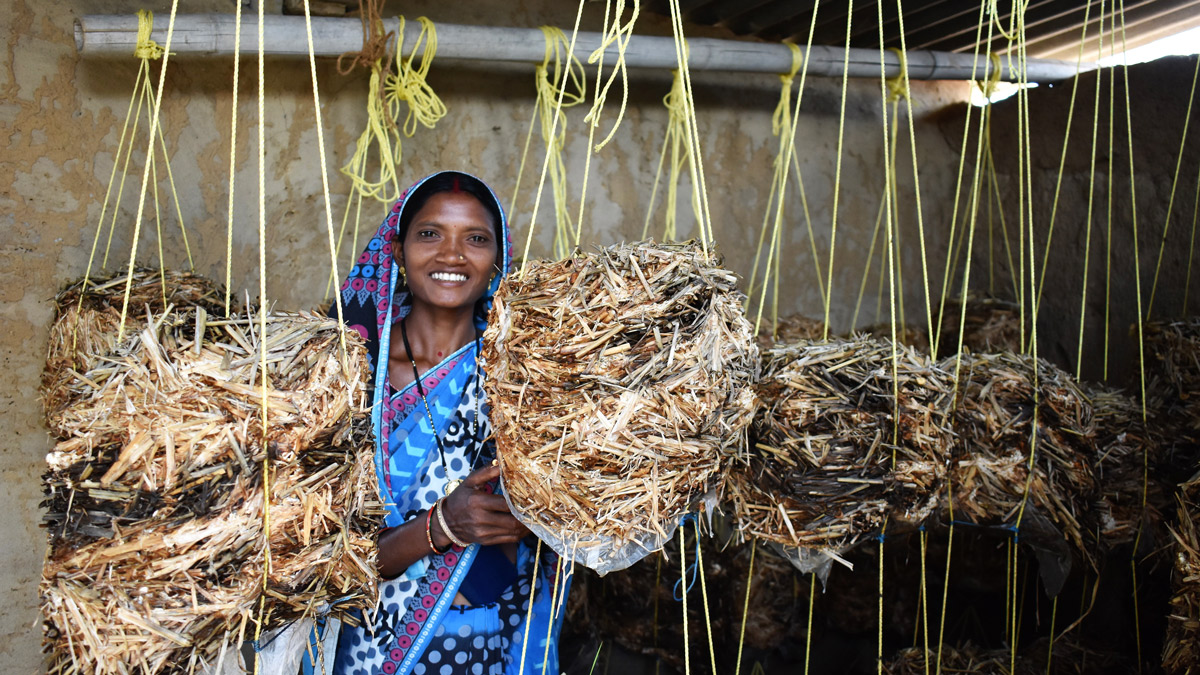 Today, Ketaki Dandasena is a leader. She is a source of guidance for 21 women in her village. Once seen as an outsider, Ketaki is now honoured by her neighbours and invited to events, to which she is now able to bring gifts of cookware, cups, food, or even money.

However, this was not always the case. Ketaki’s journey is one of resilience and adaptation.

Ketaki comes from a landless family without assets. Both she and her husband worked in wage labour to support their three children in a kaccha mud house in Balisankara, a village located in Sundargarh district of Odisha, India. When her son turned six months old, Ketaki could no longer work. The family became dependent on her husband’s wage income, often forcing him to migrate to other provinces to pursue work opportunities. Ketaki occassionally supported him by working in the fields during cultivation. Facing both money and food shortages, two meals a day was a dream for the family.

“Due to the instability of work and lack of return for labor, we often went days without food,” recalled Ketaki. “When we don’t have enough money for food, we never dare to think about our clothes and shelter. At that time, it was really very unfortunate that we could not provide decent attire to my three children.”

In 2015, Ketaki joined Trickle Up’s MPOWERED project which aims to improve livelihoods through mobile technology, capital seed grants, and livelihoods coaching. With support from Tata Communications, she received a smartphone including her in the digital world.

After assessing the needs of her neighbours and other villagers, Ketaki decided to open a small shop selling food supplies and other household items. She was able to set up her micro-enterprise using her Trickle Up seed money. With her shop the only nearby option for the villagers to get urgent household necessities, demand grew rapidly. Within a few months, she started to increase her stock. She also purchased a refrigerator by applying a loan from the local savings group—known as Self-Help Groups (SHG) in India—to store soft drinks and other beverages. With the help of the digital livelihoods app, she learned how to manage her micro-enterprise; while the money exchange feature continues to help her keep tabs on all her transactions. Gradually, Ketaki began to profit from her business and save.

As part of the project, Ketaki was connected with the government’s social welfare programs. Trickle Up facilitated getting her the required documents to enrol in the national anti-poverty work program, Public Distribution System (PDS), rural housing program, and other welfare programs. Ketaki’s coach helped her to join the local Radha Rani SHG.

Ketaki was skeptical in her early days of joining the SHG, sitting idly and thinking that she was wasting her time. At first, she struggled to reach her INR 20 monthly savings goals. A Trickle Up team member acted as mentor, guiding and supporting her in saving money and becoming an active member of her savings group. Today, Ketaki handles the bookkeeping and represents her SHG in larger platforms for sharing the experiences of SHGs, such as the Cluster Level Forum comprising 5-15 nearby SHGs ) and the village federation of SHGs known as the Gram Panchayat Level Federation.

Like it did to so many, the worldwide chaos caused by the Covid-19 pandemic hit Ketaki’s shop hard. To control the spread of the virus, the state government went into partial or complete lockdown and many businesses were forced to shut down. This uncertainty forced Ketaki to close her shop. However, using the skills she learned from the MPOWERED project, she decided to diversify her livelihood. Ketaki began cultivating mushrooms using mobile technology and Trickle Up’s digital livelihood app. Seeing her interest, a Trickle Up team member organised an online training with the horticulture department of Balisankar block.

“After getting training, I was eager to know more about mushroom cultivation,” said Ketaki. “I browsed the inputs from digital livelihoods app, YouTube and other websites.”

Ketaki prepared a raised platform in one corner of her house with deal wood flanks, which she supported by arranging bricks on all four corners. She bundled paddy straws to make 20 beds and purchased US $2.73 (INR 200) worth of seeds. Within a span of three months, Ketaki made a profit of more than US $31.35 (INR 2300). During this time, her smartphone helped her not only to learn more about business activities, but also provided her the means to connect with potential customers, take orders and sell the mushrooms.

Ketaki’s adaptation in the face of an unexpected shock is an inspiration to women in her village who followed her path for diversifying their livelihoods and pursuing sustainable pathways out of poverty. No longer relying on the generosity of others to afford clothes, Ketaki has seven saris which she bought herself from her business profits. Now Ketaki owns a pucca house, a latrine, wears shoes, and has life and health insurance for her family. She has opened a savings account and uses a portion of the earnings for her children’s education. Due to her ambition and leadership, she also became a digital coach—known as a Smart Sakhi—in the MPOWERED program providing local support for her peers. After learning about her rights as a citizen, Ketaki also helps her fellow participants enroll in social welfare programs.

Looking at the possibilities, Ketaki now plans to start opening her shop again when safety allows. This time, she plans to offer fast food items to her customers. As she strategizes her new direction, her smartphone has become an important tool for discovering new business avenues and learning how to prepare new recipes. 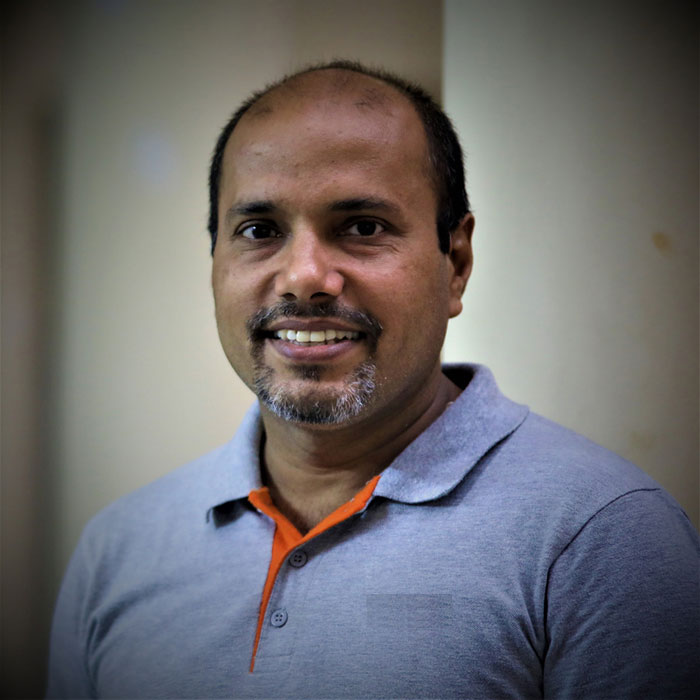 Devi Prasad Mahapatra
Devi Prasad joined Trickle Up in early 2021 as the Communications Officer for the Asia team. Devi has over 18 years of experience working in development communications. Devi previously worked with ETV Network, Dr. Reddy’s Foundation, Don Bosco Tech Society, and UNDP in various capacities. Being the custodian of the vision, position, and architecture of […]