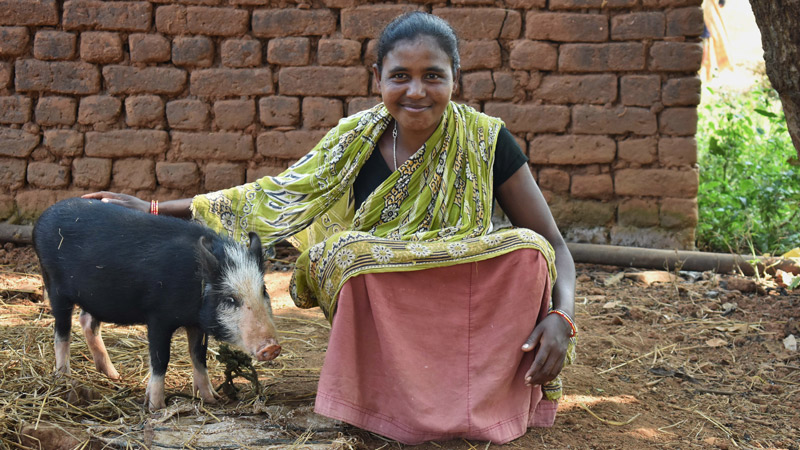 Surmani Hansda is mother to two daughters and two sons, and lives with her husband and brother-in-law in Dodari, a small hamlet in the dense Saranda forest in the West Singhbhum district of Jharkhand, India. They belong to the Ho indigenous community, a majority in the area.

The Hansda family is one of many families living in ultra-poverty in the area. Apart from their economic condition, which prevented them from eating even two meals a day, they were unaware of their rights and entitlements as Indian citizens, and could not access services and programs provided by the Government, even ones designed to benefit them and their community.

In 2017, Trickle Up and the Jharkhand State Livelihood Promotion Society (JSLPS)—the state branch of India’s National Rural Livelihoods Mission—came together to bring economic opportunities to families living in ultra-poverty in the administrative block that includes Dodari.

Surmani was selected as a participant to receive a seed grant to start a sustainable livelihood activity. She also joined a savings group with other women in the program.

Surmani took her livelihood and savings trainings seriously, carefully learning the techniques and lessons taught by JSLPS and Trickle Up. Today, she grows enough mustard, tomatoes, gram, bathua saag and radish in her backyard to feed her family and sells the surplus produce in the local markets. Surmani has also been able to save INR 10 (USD 0.13) every week since she joined the savings group.

Today, Surmani and her family are far more self-sufficient, can eat more regular meals, and can send their children to school.

“Two of my children now go to school, and one goes to the Anganwadi (government-run child centers), now that I don’t have to think about what to feed them all the time,” says Surmani. “That is a huge burden off my shoulders.”

Surmani also faces the pressure of providing medical care for her youngest child, who developed a disability after suffering from a strange case of high fever and lost the ability to speak. “I used to be very tense regarding my fourth child,” says Surmani. “With all the livelihood options I am pursuing now, I am at least happy that I will be able to afford my child’s medical care as when required.”

But the global climate crisis threatens Surmani’s progress and the villages of the Saranda forest, who now lack sufficient water due to irregular rainfall.

Given this situation, Surmani heeded advice from the trainings and discussions she attended, and decided to diversify her livelihood options to include livestock rearing. Her herd now consists of a goat that has already given two kids, a pig, and two each of chickens and cocks.

Surmani hopes her success will break the generational cycle of poverty. “All I want is to see my children happy and healthy.”