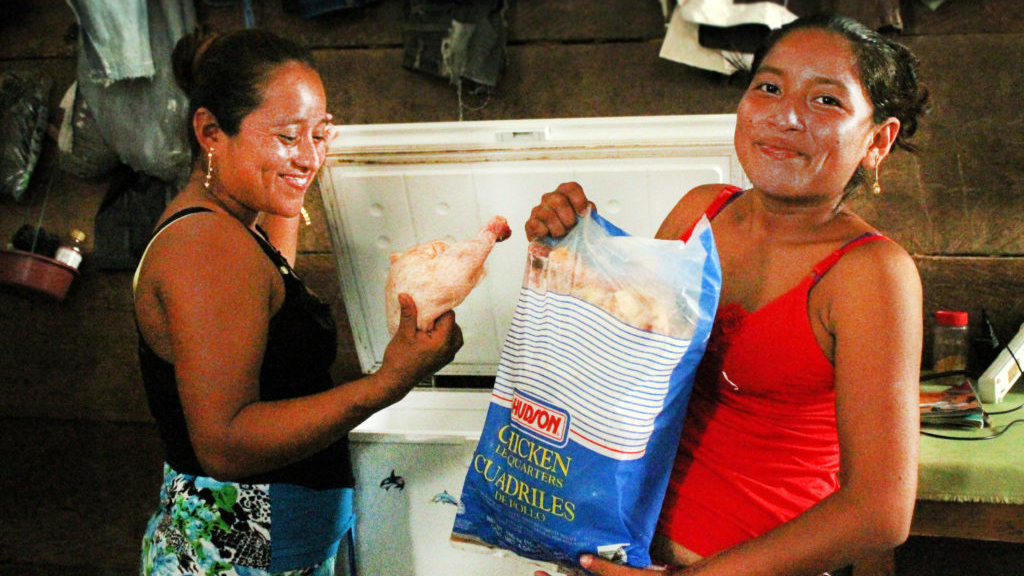 16-year-old Rutilia Xol Chub lives with her family of ten–two parents, four sisters, and three brothers. Her father and grandfather were among the founders of their community, Santa Cruz el Nacimiento, when it was officially established in 1980.

Rutilia’s family has three farm plots where they all help out growing corn. She and her sisters devoted a lot of time to clearing, planning, and harvesting the family’s land. They couldn’t afford to employ anyone to help maintain their fields, so the family had to managed it themselves. In addition to her work on the family land and her household chores, Rutilia worked as a wage laborer on other farms in the community and sold tamales. Her father and brothers also occasionally work at the palm plantation to supplement the family’s income.

Rutilia’s family ate the corn they grow, which could feed their family for a year if they don’t sell much. The rest of their diet consists of herbs, beans, eggs, pasta, and meat. Often, there are not sufficient resources to cover the family’s needs for food or clothing. They all looked for additional work so the family can cover the necessities. If they couldn’t find work, they’d ask to buy things on credit at the local store and pay for it when they had the money.

Rutilia and her three older sisters Carolina, 24, Soila, 22, and Carlota, 20, were all selected to participate in Trickle Up’s program and became very active and involved in the Flor de Santa Cruz savings group. Their family is well-known for being hard workers and Rutilia’s sister Carolina is one of the two leaders of the group, charged with group training and peer support on their sexual and reproductive health lessons.

After completing livelihood trainings in Trickle Up’s program, Rutilia had planned to start a business selling vegetables. But after just one week implementing her business selling cabbages and chayote, she realized it was not profitable.

She had not realized that the transportation costs would be so high. Shipping costs are priced according to the space and weight of the load, which drastically reduced Rutilia’s profit margin. Also, if she didn’t sell all of the vegetables in her community, Rutilia had to travel to sell to other communities before the produce went bad. She tried to avoid this by cooking the leftover chayote and selling them for $0.12 each, but this was still not enough to realize a profit.

Seeing that the vegetable business was not what they had expected, Rutilia and her sisters were encouraged to explore other businesses selling products that are not readily available in the community. Therefore, in addition to vegetables, Rutilia invested her $75 seed capital grant in chicken meat. Her home already had a freezer and this allowed her to start selling chicken immediately. With the profits they made together, the sisters managed to buy skirts to sell, diversifying their income even further. They still faced difficulties with their businesses: there are not many customers, they can not sell very often, and many customers want to buy products on credit. Yet, in each of the first two quarters, they earned between $40 and $66.50 in profits.

December was a profitable month for the Xol Chub sisters, with plenty of orders and earnings due to the end of year holidays. January and February, the hungry season, were more difficult as general scarcity in the community reduced the demand for meat.

In addition, Rutilia’s chicken business inspired her neighbors and now there are three other meat vendors in the community. Increased competition has affected her sales, and Rutilia started thinking about other options, including growing her clothing business in order to increase her income.

Through the program’s trainings, Rutilia and her sister Carolina say they have learned how to build and run a business, the importance of hygiene for their food business, how to avoid pregnancy, and especially about issues affecting young women, like self-esteem and gender equality.

Rutilia and her sisters also are saving in the Flor de Santa Cruz savings group. The sisters get along well with others in the group. When they had just begun their business, Rutilia had saved $11.25 and Carolina had saved $10. Before the end of her first year in the program, Rutilia had already saved $26.50. Before Trickle Up they did not save at all. “We had nowhere to save money. At home, we spent it. We are now saving to have money to buy clothes, skirts, and other things.” Taking advantage of the savings group and access to credit, Rutilia has also borrowed $12.50 to invest in her business.

Rutilia is motivated by these new opportunities and sees a change in her generation in the community: her mother got married very young and did not get an education. Rutilia has already completed sixth grade but she hopes that a successful business will help her continue studying until the end of middle school.

Having her own business has allowed Rutilia to get out of the house and engage in the community, as well as become more serious and responsible, as she was a little impulsive before. Her mother encourages her in these new productive activities. “If she knows how to manage her business, she will be able to support herself to continue studying.”

Given the competition from several of their neighbors who started selling chicken, Rutilia and her sisters decided to adapt their business plan again and start selling ice cream instead.

They already have some of the necessary supplies for this new business and they can still take advantage of the freezer they used to sell chicken. This past year, business has been relatively good despite the competition and they managed to increase their resources from the $75 initial capital to $375 today, which they will use in the coming months to seed fund their next venture.

With their initial profits, they bought two pigs at $37 each, which they can now sell for $125 each after just six months. Likewise, they bought three native turkeys at $9 each and will sell them in December for $38 to take advantage of price increases during the Christmas season. They also used their income to save money and buy food, medicine, and clothing.

In one year, Rutilia and her three sisters saved $145 combined. Rutilia and Zoila saved $35 each, Carlota saved $36 and Carolina saved $39. With these savings, they bought güipiles (blouses), skirts, bras, meat, and vegetables. In the second year of the savings group, they’ve already saved $21 and have taken a $25 loan to cover household expenses, which they will repay from the profits of their ice cream shop. In addition, they plan to save more this year so they can adapt their microenterprise.

“I already saw several changes,” said Rutilia’s mother. “Now they have a business, they already have profits, their money has grown. I’m happy and I like it because when I have no money, they [can help me out].”

“Without the business, I could not get money because before we only had my dad’s income,” said Rutilia’s sister Zoila. “Now we have more income and it’s sufficient for us: we’ve been able to buy turkeys, chains, earrings, food. There is always food and we could always eat some of the chickens we raise.” The sisters have also found their voices and eagerly participate in savings group meetings.

Rutilia, the youngest of the four sisters, is in charge of the financial side of the business. She tells us her plan for the future. “I hope I have money to be able to buy a plot of land and have a home.” As part of the program trainings on women’s empowerment and reproductive health and rights, the sisters learned many new things, including self-esteem, equality of rights, and that “we have the same rights as men.”

Over the last year, Rutilia and her sisters have learned a lot about market analysis, sustainable businesses, and women’s rights. They will continue to apply these learnings as they take even more steps towards economic and social empowerment, becoming leaders in their savings group and community.