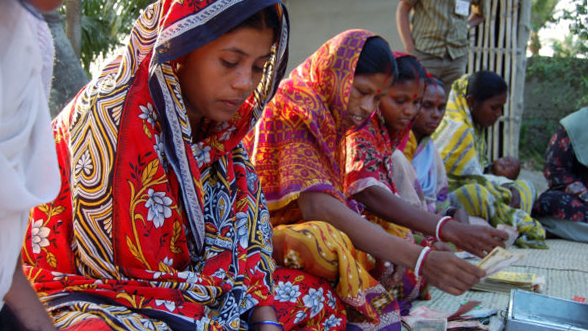 Located in an extremely remote part of the Purulia district, the 300-year-old Kumbhiradih village is only accessible by dirt roads.

During the rainy season, it’s nearly impossible for community members to travel to other areas, which means it’s just as difficult for government services to reach them, so nutrition, healthcare, and other programs are cut off for months at a time.

92% of families in Kumbhiradih belong to the Santhal indigenous group and most of the families in the village live in extreme poverty. The 16 women participating in Trickle Up’s program were identified by their neighbors as the poorest in the community. They owned very little land and only grew crops during the monsoon season, having no access to irrigation. They had little ability to save and no access to credit, except for high-interest loans from moneylenders.

Almost entirely devoid of assets and stable sources of income and food, these families experienced 9-10 months of food insecurity each year and were forced to migrate for wage labor.

When possible, these families worked as wage laborers for local wealthy families, but if that work was not available, they had to migrate multiple times a year to Bardwan, known as the “Rice Bowl of West Bengal” and located over 175 km away. When families migrate, children are uprooted from school and they all lose regular access to government services and healthcare. Recently, men in the village have needed to migrate even farther for work. They live and work in unhealthy conditions and often return home with health problems that require expensive medical care. The wages they make go almost entirely to their healthcare costs, and the family is no better off than before.

Initially, the participants in Kumbhiradih village didn’t want to form the savings group—known as self-help groups (SHG) in India—because of a prior failed attempt by a different organization.

After Trickle Up partner staff described the benefits of forming a group, the participants eventually agreed to move forward. Today, the participants recognize that the Marang Buru mahila samite group is a key resource for them and the community.

Each woman received a seed grant and eleven women in the group received training on how to optimize their agricultural activities. Growing greens, bitter gourd, onion, chili, and other vegetables, these farmers have increased their incomes to as much as 3,500 rupees ($55) over four months. Other members run small businesses selling vegetables, raising livestock, running a small grocery store, or working as blacksmiths. These small business owners earn around 550 rupees ($9) per week. Each participant has an average savings of 300 rupees ($5) and the group has already started giving out loans to its members.

Sanatan Mahato, a staff member at Trickle Up’s partner Jamgoria Sevabrata, is the coach for this group. During group trainings, Sanatan provides information on government programs so the women can access existing support programs, healthcare, and housing services. They also receive training on basic hygiene and healthcare practices, such as hand-washing, mosquito nets, and safe drinking water. The savings group also talks about how to address issues of gender-based violence.

Now the women work together to deal with larger social issues in their community.

They decided to visit the local government office of the Integrated Child Development Service, which provides nutritious food for children ages 3-6, to demand services in their village. Given Kumbhiradih’s remote location and bad road conditions, this government program previously overlooked the village. In addition, they have successfully installed a tube well after months of applying to and following up with local government officials. Now the village has easy access to clean water. The SHG also applied for support from a government program that constructs houses in impoverished communities. This level of collective action is often observed with Trickle Up savings groups as members become more educated about available services and feel empowered to work together to bring them to the community at large.

The SHG is also a support system for its members, bringing them out of isolation and creating a community. For example, Phulmoni Murmu has a six-year-old son who has suffered from malnutrition since birth. After learning about the negative effects of malnutrition and the free government services available to treat it, the members of the SHG discussed how to help Phulmoni’s son reach a treatment facility. Since Phulmoni couldn’t take her son to the far-away district hospital alone, three of them traveled with her and her son to the hospital.

The women of the Marang buru mahila samite self-help group have big plans for the future.

As part of Trickle Up’s program, the SHG will be connected with a local bank to increase their access to credit and scale up the SHG’s activities. Participants have plans to diversify their livelihoods to increase their resilience to adverse weather conditions and other unforeseen circumstances. The group also plans to continue fighting for increased social services at local government meetings by attending each gathering with a list of demands.